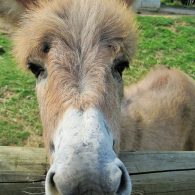 They say that “actions speak louder than words.”  Actions point to our integrity.  Do we mean what we say?  People are watching what we do, long before we say, “Jesus loves you.”  Actions reveal a lot about what we think and who or what we truly put our faith in.

Over Lent, I’m spending some time reflecting on the actions that Jesus took during Holy Week – from Palm Sunday to Good Friday.  I’m looking at Jesus’ life and asking – how did he spend his last week?  What did he do?  What did his actions mean then?  What might they mean for us today?  I am following the book The Things He Did by Stephen Cottrell.

And yes, riding a donkey was a way for Jesus to say he has come in peace.

And yes – there is something about fulfilling prophecy in scripture.

“Rejoice greatly, Daughter Zion!
Shout, Daughter Jerusalem!
See, your king comes to you,
righteous and victorious,
lowly and riding on a donkey,
on a colt, the foal of a donkey.”

Zechariah was writing at the time after the Babylonian exile – during a time of rebuilding.  He was writing to encourage those who had been in exile to rebuild – specifically the Temple.  And in Zechariah 9, we read this message of God saving His people Israel from all the bigger stronger nations that surrounded them.  God will save them and protect them.  The king will return – Jews looking for the Messiah would read this passage as referring to a certain king – the Anointed One (Jewish word is messiah).  This Anointed king would raise an army and save Israel once and for all.

This is the prophecy Jesus fulfils – just not in the way some people expected.

He rides in on a donkey as king – but Jesus doesn’t act very kingly.

He doesn’t have an army.  He doesn’t kick out the occupying forces of the Roman Empire.  He doesn’t take back the Temple from the Sanhedrin.

When he sees Jerusalem, he doesn’t shout a battle cry.

He weeps over Jerusalem and warns them that their suffering is not over.

This is the exact opposite of what happens in Zechariah 9.

Zechariah was a call to rebuild after a time of destruction.

Here – Jesus is saying, “Look.  Things are going to get worse before they get better, because you still don’t get it.”

Jesus was the one bringing peace – shalom wholeness – but they couldn’t see it.  They were too busy looking for someone else…

Some looked for a military leader that could wipe Rome out of Israel for good.

Some wanted a great statesmen who could do a better deal with Rome.

Some wanted a teacher that told them what they wanted to hear.

Some just wanted a healer – someone that solved whatever personal situation they were dealing with.

People saw many things when they looked at Jesus.  (Are we any different today?)  What they failed to see was strength in weakness and suffering love.  They failed to see the part they would need to play – a part that was not about throwing rocks or wielding swords, but was more about humility and love.

They were looking straight at him – yet could just not see.

I wonder – if Jesus were to ride down the A25 on a donkey and come up the hill towards the High Street, what would Jesus be thinking as he looked upon Sevenoaks?

Jesus looked at Jerusalem and said, “If only you knew this day who was bringing you peace – healing, wholeness, justice, completeness.”

Do we know shalom peace in Sevenoaks?  That holistic healing that God offers?

I wonder – what does it mean for us to walk the Way of Jesus – the one who rides a donkey and who weeps?

This site uses Akismet to reduce spam. Learn how your comment data is processed.

We use cookies to ensure that we give you the best experience on our website. If you continue to use this site we will assume that you are happy with it.Ok